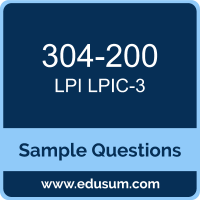 The purpose of this Sample Question Set is to provide you with information about the LPI Virtualization and High Availability exam. These sample questions will make you very familiar with both the type and the difficulty level of the questions on the 304-200 certification test. To get familiar with real exam environment, we suggest you try our Sample LPI LPIC-3 Certification Practice Exam. This sample practice exam gives you the feeling of reality and is a clue to the questions asked in the actual LPIC-3 Virtualization and High Availability certification exam.

01. Which of the following statements are true regarding IaaS computing instances?
(Choose TWO correct answers.)
a) Creation of new instances can be automated by using scripts or APIs and service interfaces.
b) The root file system of a computing instance is always persistent and can be accessed after the instance is destroyed.
c) Each and every user of an IaaS cloud has exactly one computing instance.
d) Once created, computing instances are seldom deleted in order to ensure the accessibility of the instance's data.
e) Instances may be created when needed and destroyed when they become obsolete.
02. In case one service in a Pacemaker cluster depends on another service running on the same node, which score should be assigned to the constraint describing that dependency?
a) -1
b) 0
c) 1
d) FORCE
e) INFINITY
03. How can data be shared between several virtual machines running on the same Linux-based host system?
a) By mounting other VM's file systems from /dev/virt-disks/remote/.
b) By using a network file system or file transfer protocol.
c) By default, Linux-based virtualization products provide full access to the host system to all virtual machines.
d) By setting up a ramdisk in one virtual machine and mounting it using its UUID in the other VMs.
e) By attaching the same virtual hard disk to all virtual machines and activating EXT4 sharing extensions on it.
04. When preparing a public machine image for the provisioning of new cloud computing instances, which of the following steps should be done?
(Choose TWO correct answers.)
a) Remove all default users and groups, including root and nobody.
b) Remove all configuration files from /etc/ that were not manually modified.
c) Remove all confidential data from the image.
d) Remove all remote login services (i.e. SSH) from the image.
e) Remove all private SSH keys from the image.
05. Using Linux Virtual Server (LVS) without any additional tools provides which of the following features?
a) Balancing network connections across several backend servers.
b) Automatically taking over the services of failed nodes.
c) Restarting failed services on the backend servers.
d) Checking the integrity of services on backend servers.
e) Starting and stopping backend servers as needed.
06. Which options to the xl command will deactivate a running Xen virtual machine?
(Choose TWO correct answers.)
a) destroy
b) remove
c) shutdown
d) stop
e) halt
07. What is the usual way to gain command line access to computing instances in an IaaS cloud?
a) By providing a public SSH key to the cloud management system and using the matching private SSH key to log into the instances.
b) Usually computing instances are accessed through a web frontend and do not allow command line access.
c) By either telnet or SSH using the credentials of the cloud management system account with administrative privileges.
d) By using a telnet session with the credentials set and publicized by the creator of the computing instance's system image.
e) By using a VNC console which does not require authentication when it is invoked via the cloud management system.
08. Within the graphical output of a KVM virtual machine, which key sequence switches to the KVM monitor of the VM?
a) Ctrl-Alt-1
b) Ctrl-Alt-0
c) Ctrl-Alt-4
d) Ctrl-Alt-2
e) Ctrl-Alt-3
09. How does the command to add a new resource to a Pacemaker cluster using crm begin?
a) crm manage cluster
b) crm configure resource
c) crm service add
d) crm configure primitive
e) crm resource new
10. When used with KVM, which of the following block device image formats support snapshots?
a) qcow
b) dmg
c) qcow2
d) qed
e) raw

Note: For any error in LPIC-3 Virtualization and High Availability (304-200) certification exam sample questions, please update us by writing an email on feedback@edusum.com.