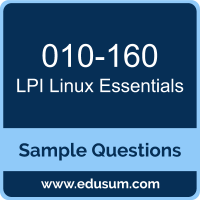 01. Most Linux distributions maintain information on what packages are installed in the ________.
a) kernel
b) package database
c) graphical desktop
d) /usr/lib directory
e) Software updater
02. You can install and manage various Linux software applications via a(n) ________ management system.
a) office
b) file
c) email
d) package
e) program
03. If you want to enable one Linux computer to access files stored on another Linux computer’s hard disk, which of the following network protocols is the best choice?
a) SMTP
b) NFS
c) PHP
d) DNS
e) DHCP
04. A Linux server that handles the SMB/CIFS protocol normally runs the ________ software.
a) ProFTPD
b) telnetd
c) named
d) Dovecot
e) Samba
05. A computer power supply converts electricity from alternating current to ________.
(two words)
a) direct current
b) three-phase current
c) magnetic current
d) static current
e) solar electricity
06. Each document in an info page is known as a ________.
a) pager
b) site
c) node
d) link
e) level
07. A type of software that’s distributed for free but that requires payment on the honor system if a person uses it is called ________.
a) open source
b) commercial
c) freeware
d) shareware
e) virus
08. Where did the Linux kernel come from?
a) It was derived from Microsoft Windows.
b) It was derived from Apple macOS.
c) It was derived from AT&T Unix.
d) It was derived from BSD Unix.
e) It was created by Linus Torvalds.
09. Users can motivate programmers to work on open source projects by offering a(n) ________ to whomever completes the project first.
a) donation
b) salary
c) present
d) kudos
e) bounty
10. What is the purpose of conditional expressions in shell scripts?.
a) They prevent scripts from executing if license conditions aren’t met.
b) They display information about the script’s computer environment.
c) They enable the script to take different actions in response to variable data.
d) They enable scripts to learn in a manner reminiscent of Pavlovian conditioning.
e) They cause scripts to run only at specified times of day.

Note: For any error in LPI Linux Essentials (010-160) certification exam sample questions, please update us by writing an email on feedback@edusum.com.