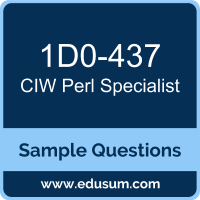 01. Which of the following describes the functionality of the DBI tables method?
a) The tables method returns a list of all system tables in a database.
b) The tables method returns a list of all user‐defined tables in a database.
c) The tables method returns a list of all tables in a database.
d) The tables method returns a list of all related tables in a database.
02. The values function performs which task?
a) Generates a list of hash keys
b) Generates a list of hash values
c) Returns the number of key/value pairs
d) Reads the hash values into an array
03. What is the output of the following Perl code segment?
a) GTO Camaro
b) 2
c) There is no output due to an error on line 2.
d) Pontiac Chevrolet
04. Running your Perl scripts with a d switch will perform which task?
a) Invoke the Perl debugger.
b) Send standard error to a file.
c) Disable breakpoints.
d) Display a stack trace.
05. In Perl, modules are used for which task?
a) To organize packages.
b) To provide code reusability.
c) To separate code in a file.
d) To create separate namespaces.
06. Which term is used to describe a subroutine that is associated with an object?
a) A module
b) A method
c) A class
d) A destructor
07. Namespaces can perform which of the following tasks?
a) Organize code and protect the variables used in one section of a program from being inadvertently overwritten by another section
b) Be reused in scripts other than the ones for which they were originally intended
c) Organize the symbols defined for each package
d) Define code that will be executed as a package is loaded into memory
08. Which command can be used to output information in a Perl program during the debugging process?
a) Print
b) Printer
c) Checker
d) Outputerr
09. In the context of Perl user‐defined subroutines, which statement is the most accurate?
a) Variables declared using the my keyword are global in scope.
b) Variables declared using the local keyword are only available to the subroutine from which they are declared.
c) Variables declared using the my keyword are available to the calling subroutine.
d) Variable declared using the local keyword are available to subsequently called subroutines.
10. How many statement handles can be open at one time within a Perl program?
a) One
b) Any number of statement handles can be open at one time.
c) Five
d) Two

Note: For any error in CIW Perl Specialist (1D0-437) certification exam sample questions, please update us by writing an email on feedback@edusum.com.