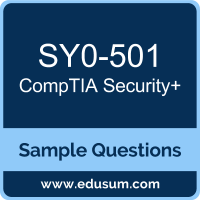 01. A security engineer wants to implement a site-to-site VPN that will require SSL certificates for mutual authentication. Which of the following will you choose?
a) L2TP/IPSec
b) SSL VPN
c) PPTP VPN
d) IKEv2 VPN
02. Which of the following if used would BEST reduce the number of successful phishing attacks?
a) Two-factor authentication
b) Application layer firewall
c) Mantraps
d) User training
03. An input field that is accepting more data than has been allocated for it in memory is an attribute of:
a) buffer overflow.
b) memory leak.
c) cross-site request forgery.
d) resource exhaustion.
04. A security administrator discovers that an attacker used a compromised host as a platform for launching attacks deeper into a company's network.
What terminology BEST describes the use of the compromised host?
a) Brute force
b) Active reconnaissance
c) Pivoting
d) Passing point
05. Joe, a security analyst, is asked by a co-worker, "What is this AAA thing all about in the security world? Sounds like something I can use for my car."
Which of the following terms should Joe discuss in his response to his co-worker?
(Select THREE).
a) Accounting
b) Accountability
c) Authorization
d) Authentication
e) Access
f) Agreement
06. A system administrator is configuring accounts on a newly established server. Which of the following characteristics BEST differentiates service accounts from other types of accounts?
a) They can often be restricted in privilege.
b) They are meant for non-person entities.
c) They require special permissions to OS files and folders.
d) They remain disabled in operations.
e) They do not allow passwords to be set.
07. The process of presenting a user ID to a validating system is known as:
a) authorization.
b) authentication.
c) identification.
d) single sign-on.
08. Which of the following is a measure of reliability?
a) MTTR
b) MTBF
c) MTTF
d) RPO
09. Recently, a company has been facing an issue with shoulder surfing. Which of the following safeguards would help with this?
a) Screen filters
b) Biometric authentication
c) Smart cards
d) Video cameras
10. Company A has just developed a bespoke system for booking airline tickets. What is it called if a freelance coding specialist tests it for security flaws?
a) Code review
b) Static code review
c) Regression testing
d) Dynamic code review

Note: For any error in CompTIA Security+ (SY0-501) certification exam sample questions, please update us by writing an email on feedback@edusum.com.