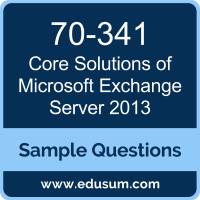 The purpose of this Sample Question Set is to provide you with information about the Core Solutions of Microsoft Exchange Server 2013 exam. These sample questions will make you very familiar with both the type and the difficulty level of the questions on the 70-341 certification test. To get familiar with real exam environment, we suggest you try our Sample Core Solutions of Microsoft Exchange Server 2013 Certification Practice Exam. This sample practice exam gives you the feeling of reality and is a clue to the questions asked in the actual Microsoft Certified Solutions Expert (MCSE) - Productivity certification exam.

These sample questions are simple and basic questions that represent likeness to the real Microsoft 70-341 exam questions. To assess your readiness and performance with real time scenario based questions, we suggest you prepare with our Premium Core Solutions of Microsoft Exchange Server 2013 Certification Practice Exam. When you solve real time scenario based questions practically, you come across many difficulties that give you an opportunity to improve.

01. You need to plan for SLAs that require the ability to restore from database corruption if corruption is detected within 10 days. The solution must reduce the time required to restore from backup, while reducing the cost. Which solution must you implement?
a) Lagged database copies.
b) VSS Shadow copy backups.
c) Tape-based backup and restore solution.
d) Offsite synchronous database copies using a third-party solution.
02. You have an Exchange Server 2013 organization that contains two Mailbox servers named MBX1 and MBX2. You create a database availability group (DAG) named DAG1. You need to ensure that replication only occurs over the replication network. Which two commands should you run?
a) Set-DatabaseAvailabilityGroupNetwork ReplicationDagNetwork01 – ReplicationEnabled $true
b) Set-DatabaseAvailabilityGroupNetworkMapiDagNetwork –ReplicationEnabled $false
c) Set-DatabaseAvailabilityGroup Dag1 –ManualDagNetworkConfiguration $true
d) Set-DatabaseAvailabilityGroup Dag1 –ManualDagNetworkConfiguration $false
03. A user complains that sending mail from her workstation slows down dramatically around the same time each day. No other users have complained. You investigate and find that she is sending approximately 5,000 automated emails per day from her workstation. Which of the following is the most likely cause of the slowdown?
a) The transaction logs on her mailbox server are stalling.
b) A scheduled backup or other task is slowing the server.
c) Her account is being throttled because it’s exceeding the limits set for the number of messages that a user can send.
d) Resource contention on the network is slowing her work.
04. In an Exchange environment that contains a single two-node DAG, if one node fails, which of the following statements is true?
a) Shadow redundancy will not preserve a copy of any messages sent.
b) Shadow redundancy will preserve a copy of all messages sent.
c) Shadow redundancy will preserve copies of any messages received from the Internet, but not messages from internal users.
d) Shadow redundancy will only preserve copies of messages from internal users, but not messages from the Internet.
05. You’re configuring load balancer for connections from IP PBX to Exchange 2013 UM. Which ports should you load balance?
a) TCP port 5060 and 5061.
b) TCP port 5062 and 5063.
c) TCP port 5065 and 5067.
d) TCP port 5066 and 5068.
06. You need to recommend a solution to resolve the issue of email messages not being received on the Internet. What should you include in the solution?
a) Modify the CNAME record.
b) Add an MX record.
c) Modify the TXT record.
d) Add a pointer (PTR) record.
07. When applying new Exchange cumulative update on one of the Mailbox servers, the update failed. You need to fix the issue. What must you do?
a) Restart the server and uninstall the failed update.
b) Run setup.exe from commandline with /recoverserver switch
c) Restart the server using last known good configuration option. Reinstall the update.
08. You want to specify the quarantine mailbox. Which of the following commands should you use?
a) Set-ContentFilterConfig -QuarantineMailbox.
b) Set-MalwareFilteringServer.
c) Set-Mailbox -Quarantine.
d) New-Mailbox -Identity Quarantine.
09. Select supported disk configuration for Exchange 2013 deployment. The deployment must provide the best possible cost benefits for design consisting of large mailboxes for every user. The planned minimum mailbox size is 5 GB per user.
a) Dedicated RAID5 configuration of 10 SSD disks per server.
b) VHD files stored on 7,200 RPM 4 TB SATA disks, served by NFS storage array using dedicated 10 Gbps network.
c) Dedicated RAID5 volume consisting of 15,000 RPM 1 TB SCSI disks on fiber channel SAN storage array.
d) Dedicated RAID10 volume consisting of 15,000 RPM 1 TB SCSI disks on Direct Attached Storage.
10. You need to recommend which tasks must be performed to meet the technical requirements of the research and development (R&D) department. Which two tasks should you recommend?
a) Create a new global address list (GAL) and a new address book policy.
b) Modify the permissions of the default global address list (GAL), and then create a new GAL.
c) Run the Update AddressList cmdlet.
d) Run the Set-Mailbox cmdlet.
e) Create an OAB virtual directory.