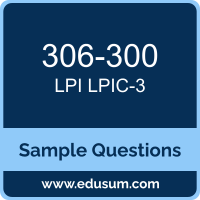 The purpose of this Sample Question Set is to provide you with information about the LPI High Availability and Storage Clusters exam. These sample questions will make you very familiar with both the type and the difficulty level of the questions on the 306-300 certification test. To get familiar with real exam environment, we suggest you try our Sample LPI LPIC-3 Certification Practice Exam. This sample practice exam gives you the feeling of reality and is a clue to the questions asked in the actual LPIC-3 High Availability and Storage Clusters certification exam.

01. In case one service in a Pacemaker cluster depends on another service running on the same node, which score should be assigned to the constraint describing that dependency?
a) -1
b) 0
c) 1
d) FORCE
e) INFINITY
02. Which of the following technologies are parts of the Red Hat Enterprise Linux High Availability Add-On?
(Choose THREE correct answers.)
a) DRBD
b) LVS
c) cLVM
d) Pacemaker
e) OCFS2
03. Using Linux Virtual Server (LVS) without any additional tools provides which of the following features?
a) Balancing network connections across several backend servers.
b) Automatically taking over the services of failed nodes.
c) Restarting failed services on the backend servers.
d) Checking the integrity of services on backend servers.
e) Starting and stopping backend servers as needed.
04. How does the command to add a new resource to a Pacemaker cluster using crm begin?
a) crm manage cluster
b) crm configure primitive
c) crm service add
d) crm configure resource
e) crm resource new
05. What action does the virsh restore command perform?
a) It restores a virtual machine that was stopped by a kernel panic.
b) It restores a virtual machine from a state file.
c) It reverts a virtual machine, including its storage devices, to a previously saved state.
d) It wakes up a virtual machine that was hibernated by the operating system running inside the virtual machine.
06. Which of the following commands displays only the resources of the cluster information base of a pacemaker cluster?
a) cibquery -o resources
b) cibadmin -R
c) cibadmin -Q -o resources
d) cibquery -L resources
e) cib_admin -L resources
07. When using the gatewaying/direct routing forwarding method of Linux Virtual Server (LVS), which of the following statements is true?
a) The default route of all backend servers must point to the LVS host.
b) On the backend servers, all packets appear to originate from the IP address of the LVS host.
c) The link layer addresses of all backend servers must be included in the LVS configuration.
d) When using gatewaying/direct routing, only the round robin algorithm is available.
e) Every backend server must accept packets addressed to the IP address of the virtual service.
08. Which of the following statements are true regarding a load balancer?
(Choose TWO correct answers.)
a) Failover clusters are not operational without at least one dedicated load balancer.
b) All response packages sent from a backend server to a client must pass through the load balancer.
c) The load balancer is usually deployed on one of the backend servers.
d) Load balancers may be able to analyze traffic.
e) All incoming connections to the cluster services are received by the load balancer.
09. Which O2CB mode should be used for OCFS2 integration with heartbeat?
a) user
b) dlm
c) heartbeat
d) kernel
10. Which of the following statements describes fencing resources in a high availability cluster?
a) Fencing is the automated stop and restart of cluster services that suffer from software errors.
b) Fencing is the disconnection of a failed cluster node from any other cluster resources.
c) Fencing is the forwarding of incoming network connections to backend servers.
d) Fencing is the assignment of services to different cluster nodes to avoid interference of the services.
e) Fencing is the accounting and limitation of disk usage on shared storage.

Note: For any error in LPIC-3 High Availability and Storage Clusters (306-300) certification exam sample questions, please update us by writing an email on feedback@edusum.com.