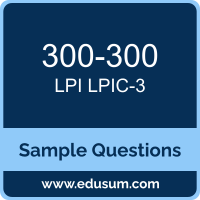 The purpose of this Sample Question Set is to provide you with information about the LPI Mixed Environment - 300 exam. These sample questions will make you very familiar with both the type and the difficulty level of the questions on the 300-300 certification test. To get familiar with real exam environment, we suggest you try our Sample LPI LPIC-3 Certification Practice Exam. This sample practice exam gives you the feeling of reality and is a clue to the questions asked in the actual LPIC-3 Mixed Environment certification exam.

01. A Samba 4 server provides DNS information regarding an Active Directory Domain. All other DNS information is provided by another DNS server. Which of the following solutions ensures that the clients of the Samba server can look up all DNS records including those from the domain?
a) The additional DNS server is configured in the file /etc/resolv.conf on the Samba server and the option dns forwarder = yes is set in smb.conf.
b) The additional DNS server is configured in the option dns forwarder in smb.conf. All clients query the Samba server for any DNS information.
c) Both the Samba server and the additional DNS server are configured on the clients. It is ensured that the Samba server is listed first in each client's resolv.conf.
d) All clients are configured to send DNS queries to the additional DNS server only. The Samba servers smb.conf contains the option wins dns proxy = yes to provide all domain-related naming information via NetBIOS name service independently from DNS.
02. Which of the following properties does the configuration option cachesize in slapd.conf refer to?
a) The maximum cache size in bytes.
b) The size of the cache in bytes.
c) The size of the cache in bits.
d) The minimum cache size in bytes.
e) The number of entries to be cached.
03. An administrator has manually migrated local accounts to OpenLDAP, instead of using migration tools. When trying to authenticate as a user, an error is returned about invalid credentials. What is the most likely cause of this?
a) The password hash type was not included in the user's password attribute.
b) Shadow passwords are incompatible with OpenLDAP.
c) The original password from /etc/passwd was not included.
d) The administrator forgot to run slappasswd to convert the hashes in /etc/shadow.
e) The administrator forgot to run ldappasswd to convert the hashes in /etc/shadow.
04. By default Samba tries to recognize correct charsets between server and client. Which parameters can be used in smb.conf to set them manually?
(Choose TWO correct answers)
a) unix charset
b) display charset
c) dos charset
d) windows charset
e) unicode
05. CIFS relies upon which port for direct hosting without requiring NetBIOS?
a) 139
b) 443
c) 137
d) 445
06. How can consistent UIDs and GIDs be assured on several UNIX/Linux systems that are sharing information over protocols other than SMB/CIFS, for example NFS?
a) By specifying a common OpenLDAP idmap backend in smb.conf.
b) By specifying a common Kerberos realm in smb.conf.
c) By specifying a common domain name in smb.conf.
d) By specifying a common password server in smb.conf.
e) By specifying a common winbind ID range in smb.conf.
07. Beginning with Windows 2000, by default, Windows requires that passwords on your Samba server:
a) do not exceed 32 characters.
b) contain both numbers and letters.
c) are encrypted.
d) are changed every 30 days.
08. In smb.conf, what is the numeric value for the directory mask directive to ensure directories created within a share will have full permissions for all users?
a) 777
b) 778
c) 779
d) 780
09. For Samba 3 to be able to work as a PDC, some modifications are needed in its main configuration file. Which of the following options describe the required actions for this task?
(Choose three.)
a) The Samba server has to be a logon server. This can be configured by the domain logons directive.
b) The Samba server needs to have the logon and the account scripts, to properly setup the PDC environment.
c) The Samba server must be a Domain Master Browser. To configure this, the domain master directive must be set to yes.
d) The time server = yes directive needs to be configured, so samba will behave as a WINS server and also a Time server.
e) the security - user directive must be set.
10. On Microsoft Windows systems, ACLs on the share are set using tools like the Explorer. For example, in Windows 7, right-click on the shared folder, then select Sharing, then click on Permissions. What Windows group, by default, has full control of the share?
a) Everyone
b) Guests
c) Authenticated Local Users
d) Samba Share Service

Note: For any error in LPIC-3 Mixed Environment (300-300) certification exam sample questions, please update us by writing an email on feedback@edusum.com.