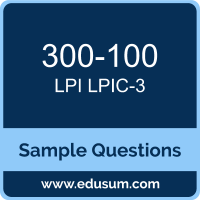 The purpose of this Sample Question Set is to provide you with information about the LPI Mixed Environment - 300 exam. These sample questions will make you very familiar with both the type and the difficulty level of the questions on the 300-100 certification test. To get familiar with real exam environment, we suggest you try our Sample LPI LPIC-3 Certification Practice Exam. This sample practice exam gives you the feeling of reality and is a clue to the questions asked in the actual LPIC-3 Mixed Environment certification exam.

01. When upgrading a Samba 3 to a Samba 4 Active Directory domain using samba-tool domain classicupgrade, which of the following statements are true?
(Choose three.)
a) All machines have to rejoin the new domain.
b) The profiles of the users remain unchanged.
c) Samba configures its internal NTP server to synchronize the systems clocks of all domain members.
d) The user accounts and machine accounts are migrated into the new database.
e) A basic set of DNS records required for AD operation are provisioned.
02. In order to generate an individual log file for each of the machines connecting to a Samba server, which of the following statements must be used in the Samba configuration file?
a) log file = /var/log/samba/log.%c
b) log file = /var/log/samba/log.%M
c) log file = /var/log/samba/log.%m
d) log file = /var/log/samba/log.%I
03. Which of the following options must be set in smb.conf in order to actively configure Samba as Directory domain controller?
a) security = adds
b) ad server mode = domain controller
c) server role = active directory domain controller
d) active directory logons = yes
04. The [homes] section of smb.conf contains the parameter browseable = no. What are the resulting consequences?
(Choose two.)
a) When browsing the Samba server, there is no visible share called homes.
b) The homes share can be directly accessed by specifically opening this share by its UNC path.
c) When browsing the Samba server, users can open the homes share but they cannot see the content of their home directories.
d) If the Samba server is part of an Active Directory Domain, only users in the group SeBrowsingUsers can browse the homes share.
e) When browsing the Samba server, there is no visible share named after the current user.
05. By default, Samba tries to automatically detect the correct character set to use with a connecting client. Which parameter in smb.conf forces Samba to use only ASCII?
a) global charset = ASCII
b) unicode = no
c) ASCII = yes
d) force charset = ASCII
e) reduce charset = yes
06. Which of the following ports are open by default on a Samba 4 Active Directory Domain Controller?
(Choose three.)
a) 443/TCP
b) 138/TCP
c) 389/TCP
d) 445/TCP
e) 53/TCP
07. What is true about the option create mask in smb.conf?
a) Each permission bit that is set (1) create mask cannot be set on a file created by Samba even if the client requests it to be set.
b) Each permission bit that is cleared (0) in create mask is only set on a file created by Samba if the client explicitly sets the bit.
c) Each permission bit that is set (1) in create mask is always set on a file created by Samba regardless of the permissions set by the client.
d) Each permission bit that is cleared (0) in create mask is always cleared on a file created by Samba even if the client explicitly sets the bit.
08. Microsoft file system are not case sensitive to file names. Linux file systems are case sensitive to file names.
Which of the following configuration directives defines how Samba handles file name mapping in this situation?
a) name map
b) case map
c) case sensitive
d) case on
09. After configuring a Unix client to authenticate with a Microsoft Active Directory server, login attempts are unsuccessful. Which of the following is most likely the cause?
a) Unix Client support is disabled in the Active Directory configuration.
b) The PAM library is searching the directory with the default search filter.
c) The slapd daemon is not running on the client.
d) The user account in the Active Directory has the remote login setting disabled.
10. What a benefits of using Single Sign-On (SSO)?
(Choose three.)
a) Reduce IT costs due to lower number of IT help desk about passwords.
b) Reduce time spent re-entering passwords for the same identity.
c) Reduce number of passwords to remember.
d) Reduce password complexity.
e) Reduce number of services used by users.

Note: For any error in LPIC-3 Mixed Environment (300-100) certification exam sample questions, please update us by writing an email on feedback@edusum.com.