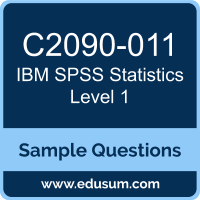 These sample questions are simple and basic questions that represent likeness to the real IBM C2090-011 exam questions. To assess your readiness and performance with real time scenario based questions, we suggest you prepare with our Premium IBM SPSS Statistics Level 1 Certification Practice Exam. When you solve real time scenario based questions practically, you come across many difficulties that give you an opportunity to improve.

01. When you read data stored in an Excel file via File ... Open ... Data, you may need to specify which options?
(Choose three.)
a) Read variable names from the first row of data
b) Read a Range of cells
c) Specify the Worksheet to read/import
d) Number of Worksheets to read/import
02. The IBM SPSS Statistics Select Cases provides various ways to select cases included in further analysis.
If you needed to conduct analysis on those respondents whose age is more than 30 years, earning in excess of $40000, which option in this dialog would you choose to specify these criteria?
a) Random sample of cases
b) Based on time or case range
c) Use filter variable
d) If condition is satisfied
03. IBM SPSS Statistics system variables can be:
a) Used in data transformations.
b) Specified in analysis procedures.
c) Modified using Compute Variable.
d) Viewed in the Data Editor.
04. In order to access the New Custom Attribute feature in the Data Editor, the Data Editor must be viewed from the:
a) Value Labels button.
b) Dialog Recall button.
c) Data View tab.
d) Variable View tab.
05. Which statement is true about IOR (inter quartile range)?
(Choose two.)
a) It is used to measure the spread of the data.
b) It is equal to the mode.
c) It is the range between the values at the 25111 and 75111 percentile.
d) It indicates whether the variable is normally distributed or not.
06. What type of graph would you use to see the distribution of a scale variable?
a) Bar chart
b) Pie chart
c) Histogram
d) Scatter plot
07. If you request an aggregated dataset or data file in the Aggregate procedure, the number of cases in the new aggregated file is equal to what?
a) Number of cases in the original data file
b) Number of categories of the variables specified in the Break Variables list
c) Number of aggregated summary variables
d) Number of cases that you specified in the Aggregate Data dialog box
08. Which feature would you use to create a new variable whose values represent the number of times that each respondent answered Strongly Agree to a series of satisfaction questions?
a) Compute Variable
b) Visual Binning
c) Count Values within Cases
d) Rank Cases
09. A paired samples t-test is different from an independent t-test because it:
a) Assesses each person twice.
b) Compares groups on correlations.
c) Compares groups on means.
d) Compares groups on variances.
10. The Merge Files facility is located under which menu?
a) View
b) Transform
c) Analyze
d) Data