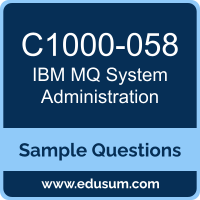 These sample questions are simple and basic questions that represent likeness to the real IBM C1000-058 exam questions. To assess your readiness and performance with real time scenario based questions, we suggest you prepare with our Premium IBM MQ System Administration Certification Practice Exam. When you solve real time scenario based questions practically, you come across many difficulties that give you an opportunity to improve.

01. Which statement is true regarding a floating IP address that can be attached to a QMGR when using RDQM?
a) Must be a part of different subnet
b) Must be a part of the same subnet as all nodes
c) Must be part of the same subnet as any one node
d) Can be a part of a different subnet if the nodes cross data centers
02. A channel is occasionally slow in sending messages. Which channel statistics would be most useful in identifying whether a user exit configured on the channel is responsible for the delay?
a) ExitTimeMin and MsgCount
b) ExitTimeAvg and NetTimeAvg
c) ExitTimeMax and PurgeCount
d) ExitTimeAvg and ExitTimeMax
03. How is a multi-instance queue manager created?
a) Create a queue manager on both servers ensuring it is the same name on both
b) Create a queue manager on both servers, including the server details of the other server in the QMGR settings.
c) Create a queue manager and run the command dspmqinf on the first server then run the command addmqinf on the second server.
d) Create a queue manager on the first server, run the command dmpmqcfg on the first server and import the configuration into the second server using the command addmqcfg
04. What can a message-retry channel exit be used for?
a) Retrying to send a message
b) Retrying a message channel exit
c) Sending messages to a different queue
d) Determining under which circumstances to retry
05. What is one of the prerequisites to migrate a single instance queue manager to a multi-instance one?
a) Enable queue manager trace
b) Define CLUSRCVR and CLUSSDR channels
c) Move the queue manager data to a shared directory and reconfigure it to use that shared directory
d) Backup the single instance queue manager, shut it down, then create a new shared queue manager and restore backed up configuration
06. What command is used to find out which channel is expected to process the transmission queue QM2?
a) DIS CHANNEL (QM1.TO.QM2) ALL
b) DIS CHANNEL(*) WHERE(XMITQ EQ QM2)
c) DIS CHANNEL (MQM) WHERE(QMGR EQ QM2)
d) DIS CHANNEL (*) ALL (WHERE XMITQ EQ QM2)
07. Which statement is true regarding trace-route messaging?
a) It cannot be used for a clustered queue manager
b) It collects MQI activity information
c) It detects the latency of messages going through a queue manager
d) It is a technique that involves sending an IBM MQ trace-route message into a queue manager network
08. What command line tool is used to manage queue manager objects?
a) mqm
b) mqm.sh
c) runmqsc
d) mqexplorer.exe
09. An Application Developer is using a Unix queue manager and wants to know if the queue manager is set as the default. Where can this information be found?
a) qm.ini
b) mqs.ini
c) With the MQSC command: DIS QMGR
d) Using the command showQueuemanagerDetails
10. If during normal operation the IBM MQ Appliance detects an intrusion, what will happen the next time the appliance restarts?
a) The appliance will flash the Locate LED
b) The appliance will repeatedly shut down
c) The appliance will enter Fail Safe mode
d) The appliance will enter Disaster Recovery mode