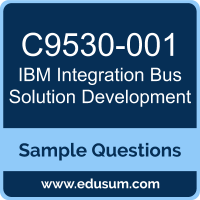 These sample questions are simple and basic questions that represent likeness to the real IBM C9530-001 exam questions. To assess your readiness and performance with real time scenario based questions, we suggest you prepare with our Premium IBM Integration Bus Solution Development Certification Practice Exam. When you solve real time scenario based questions practically, you come across many difficulties that give you an opportunity to improve.

01. Which destination can a trace node output not to be written to?
a) File
b) Console
c) User Trace
d) Local Error Log
02. How are the pattern properties from the exemplar projects associated with the Pattern Authoring project?
a) The exemplar projects are associated with project references.
b) The exemplar project and the Authoring project must be in the same Workspace.
c) The exemplar project and the Authoring project must be in the same Working Set.
d) Patterns properties must be added manually and then selected in the exemplar project.
03. When using the IBM Integration Bus Toolkit, how can the results of a deploy be checked?
a) Event Monitoring
b) IIB log command
c) Toolkit workspace log
d) Toolkit Deployment log
04. Which IBM supplied messages can be imported to create a new message definition file?
a) TDS
b) MRM
c) BLOB
d) SOAP
05. If an Integration Node contains four Integration Servers, using the default topology, how many catalog and cache container servers will be hosted?
a) One catalog server and two cache container servers.
b) Two catalog servers and two cache container servers.
c) One catalog server and four cache container servers.
d) Three catalog servers and one cache container server.
06. What is one method to keep the cache clean in IBM Integration Bus?
a) Define a timeout parameter in the Policy file.
b) Use the MbGlobalMapSeccionPolicy class to expire the Global Cache variable.
c) Set up an external process to check the variables that have not been modified in a speculated amount of time and remove them.
d) Use remove() on the MbGlobalMap class. In case of a catastrophic crash of the node, the cache will detect this and remove the variable implicitly.
07. An IBM Integration Bus developer is testing integration flow with the Flow Exerciser by processing the different messages through the flow and recording each one of them. At a later time, the developer would like to see the state of the logical message tree for each message instance. How can this be done?
a) By selecting the connector highlighted in red.
b) The developer can only view the last message processed.
c) By right-clicking message flow > Properties > Show recorded messages.
d) By selecting 'Send a message to the flow' and selecting the recorded message.
08. While debugging a message flow a redeployment of the flow hangs. What could be the source of the problem?
a) A backout queue name was not defined.
b) The debugger is waiting on a breakpoint.
c) No additional instances of the flow was defined.
d) The jvmDebugport was not defined on the Integration Server.
09. The format of a policy UPL is apiv1/policy/MQTTSubscribe/Test. What policy has the developer created?
a) MQTTSubscribe Policy 1
b) MQTTSubscribe Policy Test
c) MQTTSubscribe Policy apiv1
d) MQTTSubscribe Policy policy
10. What would the command mqsichangebroker ibnode -f 10.0.0.3 do?
a) Install fixpack 10.0.0.3.
b) Remove fixpack 10.0.0.3.
c) Change the function level of ibnode.
d) Change the operation mode for the ibnode. I