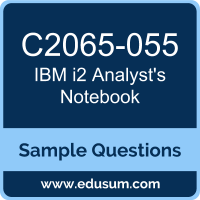 The purpose of this Sample Question Set is to provide you with information about the IBM i2 Analyst's Notebook V9 exam. These sample questions will make you very familiar with both the type and the difficulty level of the questions on the C2065-055 certification test. To get familiar with real exam environment, we suggest you try our Sample IBM i2 Analyst's Notebook Certification Practice Exam. This sample practice exam gives you the feeling of reality and is a clue to the questions asked in the actual IBM Certified Analyst - i2 Analysts Notebook V9 certification exam.

These sample questions are simple and basic questions that represent likeness to the real IBM C2065-055 exam questions. To assess your readiness and performance with real time scenario based questions, we suggest you prepare with our Premium IBM i2 Analyst's Notebook Certification Practice Exam. When you solve real time scenario based questions practically, you come across many difficulties that give you an opportunity to improve.

a) Icon
b) Text Block
c) Theme Line
d) Event Frame
04. After using the Find Matching Entities tool, an analyst merges three entities that have been concluded to be the same. Which statement is correct about the now merged entities?
a) Links from each entity will be detailed on cards on the target entity.
b) The target entity on the chart contains a card for each merged entity.
c) The resulting Label will be that of the target entity selected first during the merge.
d) The resulting Identity depends on the Identity merge and paste rules that are specified in the Behavior page of the Chart Properties window.
05. Which of the following statements about identity is true?
a) It is available in entities and links.
b) It is case-sensitive, but not character-sensitive.
c) It allows for easy duplication of entities and links.
d) It determines merging when copying from chart to chart.
06. A crime analyst would like to use the Social Network Analysis centrality measure that finds the entities that may have strong influence in the network due to their direct links to other highly active or well connected entities.
Which centrality measure should the analyst select?
a) Degree
b) Closeness
c) Eigenvector
d) Betweenness
07. What is the quickest way to distribute a chart electronically in its original (.anb) format from within the application?
a) Send by Email
b) Send as PDF
c) Mail my Chart
d) Export as PDF
08. An analyst is tasked with creating custom entity types for the organization. The analyst is creating a Parolee entity.
In order to separate an inmate from a parolee when using Smart Matching with the search area based on semantic type, the proper placement of this semantic type in the semantic tree needs to be used. What is the proper placement?
a) Place in Offender
b) Place in Person Alias
c) Place as a child of Offender
d) Place as a sibling of Offender
09. The data set being imported contains a column of Social Security numbers preceded by a 4 digit prefix and a 5 digit suffix. For the purpose of the chart being created, the prefix and suffix need to be removed from all entries prior to import.
Which of the following is the MOST efficient Column Action to accomplish this task?
a) Remove Prefix
b) Trim Characters
c) Remove Characters
d) Extract Portion of Text
10. A manager has provided a file to an analyst containing cellular phone data including dates, times, call duration, and phone numbers. The manager has asked that the dates be formatted to match the screen shot.
Which format will meet the manager's request?
a) M/d/yy H:mm:ss
b) M/d/yyyy H:mm:ss
c) M/dd/yyyy H:mm:ss
d) MM/d/yyyy H:mm:ss tt

Note: For any error in IBM Certified Analyst - i2 Analysts Notebook V9 (C2065-055) certification exam sample questions, please update us by writing an email on feedback@edusum.com.