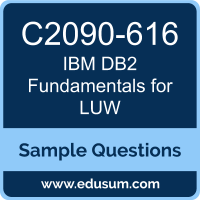 The purpose of this Sample Question Set is to provide you with information about the DB2 11.1 Fundamentals for LUW exam. These sample questions will make you very familiar with both the type and the difficulty level of the questions on the C2090-616 certification test. To get familiar with real exam environment, we suggest you try our Sample IBM DB2 Fundamentals for LUW Certification Practice Exam. This sample practice exam gives you the feeling of reality and is a clue to the questions asked in the actual IBM Certified Database Administrator - DB2 11.1 for Linux UNIX and Windows certification exam.

These sample questions are simple and basic questions that represent likeness to the real IBM C2090-616 exam questions. To assess your readiness and performance with real time scenario based questions, we suggest you prepare with our Premium IBM DB2 Fundamentals for LUW Certification Practice Exam. When you solve real time scenario based questions practically, you come across many difficulties that give you an opportunity to improve.

01. The creator of an index or an index specification automatically receives which privilege on the index?
a) SELECT
b) DELETE
c) UPDATE
d) CONTROL
02. Which of the following is TRUE about a COMMIT statement executed at the end of the T1 unit of work?
a) A ROLLBACK command executed just after the COMMIT command cancels that COMMIT
b) Save points defined during transaction T1 are released only if there is a RELEASE SAVEPOINT command executed after the COMMIT command
c) It finishes the current T1 unit of work and a new one is initiated, however it is possible to ROLLBACK to the latest SAVEPOINT before COMMIT
d) It finishes the current T1 unit of work and a new one is initiated. All changes made by UPDATE and DELETE commands during unit of work T1 are committed
03. What is the primary use case for creating an index with the RANDOM option on a table?
a) Maximize performance with OLTP random key queries
b) Maximize performance when inserting into an expression based index containing the RAND() function
c) Minimize contention due to ascending key or descending key inserts, especially in a pureScale environment
d) Minimize hashing skew on a table in a multiple database partition environment, especially with column organized tables
04. Shadow tables are a special kind of Materialized Query Table, but what makes them different?
(Choose two.)
a) Shadow tables cannot be queried directly
b) \\Shadow tables do not store their data on disk
c) Shadow tables must be organized by column
d) Shadow tables must be maintained by replication
e) You cannot join shadow tables to other kinds of tables
05. Which constraint can be used to ensure that identical values are never stored in a set of columns in a table?
a) NOT NULL
b) Foreign key
c) Primary key
d) Informational constraint
06. Your manager has asked you to review cloud service offering for hosting a DB2 database. As the DBA, you still want to maintain control over all maintenance and patching operations.
Which of the following Cloud offerings best suits your needs?
a) Cloudant
b) DB2 on Cloud
c) dashDB for analytics
d) dashDB for transactions
07. Which of the following authorities is sufficient for connecting to a database?
a) SQLADM
b) ACCESSCTRL
c) DATAACESS
d) CONNECT
08. With HADR, which of the following configuration and topology choices provides the highest level of protection from potential loss of data in a pureScale environment?
a) Principal standby with SYNC synchronization mode
b) Auxiliary standby with SYNC synchronization mod
c) Principal standby with NEARSYNC synchronization mode
d) Auxiliary standby with SUPERSYNC synchronization mode
09. A multi-partition database environment using BLU acceleration is designed to meet which of the following requirements?
(Choose two.)
a) Easy scalability
b) Management of very large data sets
c) Continuously available dataset solution
d) Increased throughput of many concurrent short running queries
e) Faster response time of long-running or complex queries with I/O spread across many computers
10. You are asked to provide a recommendation for the appropriate DB2 edition for a new application. The application is characterized by long, complex queries that select a subset of columns and often perform grouping and aggregation.
The initial database size is estimated at 5 TB, with growth of about 100 GB per year. Keep data size on disk to a minimum is a priority? Which of the following editions would be best meet the described needs?
a) DB2 Express-C
b) DB2 Enterprise Server Edition
c) DB2 Workgroup Server Edition
d) DB2 Advanced Enterprise Server Edition

Note: For any error in IBM Certified Database Administrator - DB2 11.1 for Linux UNIX and Windows (C2090-616) certification exam sample questions, please update us by writing an email on feedback@edusum.com.