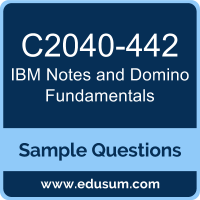 01. In what way are an Accordion Container, a Stack Container and a Tab Container all similar?
a) Each contains a single pane split into multiple frames.
b) Each contains multiple panes displayed in a grid pattern.
c) Each contains a single pane with dynamically changing content.
d) Each contains multiple panes and only displays one pane at a time.
02. Bill has enabled DAOS on his IBM Domino mail servers. How can Bill get more information on DAOS operations?
a) He would check for error messages in log.nsf.
b) He would have to confirm the number of NLO files.
c) He would issue the command tell daosmgr status.
d) He would run show stats daos from the Domino console.
03. What type of HTML tag is generated by a Panel Container Control?
a) <p>
b) <br>
c) <div>
d) <span>
04. Sarah has been asked to remove company data from a mobile device that's been lost. How can she do this?
a) She would issue a remote wipe command for that device.
b) She would need to call the mobile device carrier and have them clear the device.
c) She would need to change the user's IBM Notes Traveler configuration to an empty mail file.
d) She would issue a tell traveler clear device user command on the Traveler server.
05. What feature allows IBM Domino users to send secure 128-byte encrypted SMTP messages?
a) SPNEGO
b) IP Version 6
c) Banyan Vines protocol
d) SMTP over SSL
06. By default, which IBM Domino mail protocol requires additional configuration to process return receipts?
a) SMTP
b) POP3
c) IMAP
d) NRPC
07. What action can an administrator take if an IBM Notes Traveler device is found to be not compliant with a security policy?
a) Require mail attachments be encrypted
b) Require mail messages be digitally signed
c) Require virus protection software be installed
d) Require that data on removable storage cards be encrypted
08. How can Cheryl be sure that her Recent Contacts has the most up-to-date information?
a) She must manually update the entry in Recent Contacts
b) Recent Contacts are automatically maintained with up-to-date detail
c) She must use the name in an email chat or calendar entry in order for an update to occur
d) She should select to synchronize Recent Contacts with her server's directory on the replication page
09. Matt wants to schedule local archiving but cannot. Why would this happen?
a) Archiving is set to "Domino Server based on" instead of "Notes Client based to" on the Basics Tab of the Archive Settings.
b) Matt is missing a role with Manager access to his mail file.
c) A policy is in place that prevents him from scheduling local archiving.
d) Matt has Designer rights to his mail file.
10. IBM iNotes requires that the user log in with a username and password. Where is the password for iNotes stored?
a) in the user's Notes ID stored on the client
b) in the users Person document in the IBM Domino Directory
c) in the user's configuration document on the server
d) in the user's Notes ID file stored on the server

Note: For any error in IBM Certified Associate - Notes and Domino (C2040-442) certification exam sample questions, please update us by writing an email on feedback@edusum.com.