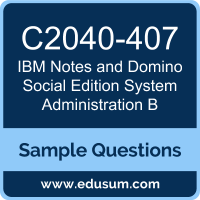 These sample questions are simple and basic questions that represent likeness to the real IBM C2040-407 exam questions. To assess your readiness and performance with real time scenario based questions, we suggest you prepare with our Premium IBM Notes and Domino Social Edition System Administration B Certification Practice Exam. When you solve real time scenario based questions practically, you come across many difficulties that give you an opportunity to improve.

01. What needs to be done to an IBM Domino certifier to allow it to be managed by the CA process?
a) Nothing, all certifiers are managed by the CA process by default.
b) The certifier needs to be generated within the CA application itself.
c) Following creation, the certifier needs to be migrated to the CA process.
d) A safe copy of the certifier ID needs to be imported into the CA application.
02. In which two documents can policies be assigned to a user?
(Choose two.)
a) Policy
b) Server
c) Person
d) Program
e) Configuration
03. Can an administrator assign a policy to a user by editing his person document?
a) no
b) yes, only explicit policies
c) yes, only organizational policies
d) yes, both organizational and explicit policies
04. As an administrator, what can be used to easily manage groups in the IBM Domino Directory?
a) a desktop policy
b) the Monitoring task
c) the Administration Process
d) the Manage Group tool in the Domino Administrator client
05. Which two processes are detected by the IBM Notes Install Cleanup Executable tool?
(Choose two.)
a) nfixup.exe
b) notes2.exe
c) soffice.bin
d) nreplica.exe
e) ncompact.exe
06. The idpcat.nsf will contain which document(s) with the SAML configuration?
a) IdP assertion document(s)
b) SAML assertion document(s)
c) IdP configuration document(s)
d) SAML configuration document(s)
07. A user has Author access in a database. What is he able to do?
a) He is able to create documents.
b) He is able to edit documents he created.
c) He is able to delete documents he created.
d) Create documents only if he also has the "Create documents" access level privilege.
08. Which coding language can be used for machine-specific policy settings?
a) C
b) C++
c) LotusScript
d) Formula language
09. What encryption standard has been introduced in IBM Domino 9.0 Social Edition?
a) Secure Hash Algorithm (SHA-2)
b) Wired Equivalent Privacy (WEP)
c) Advanced Encryption Standard (AES)
d) Federal Information Processing Standard (FIPS)
10. How are encrypted messages handled by SMTP mail rules?
a) SMTP mail rules are unable to process encrypted messages.
b) SMTP mail rules can process encrypted messages, but only using information stored in the unencrypted portion of the message.
c) Encrypted mail is decrypted using information stored in the ID Vault, processed, then reencrypted.
d) SMTP messages cannot be encrypted so this is never an issue.

Note: For any error in IBM Certified System Administrator - Notes and Domino 9.0 (C2040-407) certification exam sample questions, please update us by writing an email on feedback@edusum.com.