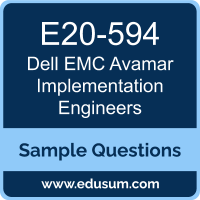 The purpose of this Sample Question Set is to provide you with information about the Dell EMC Avamar Specialist for Implementation Engineers exam. These sample questions will make you very familiar with both the type and the difficulty level of the questions on the E20-594 certification test. To get familiar with real exam environment, we suggest you try our Sample Dell EMC Avamar Specialist Certification Practice Exam. This sample practice exam gives you the feeling of reality and is a clue to the questions asked in the actual Dell EMC Certified Specialist - Implementation Engineer - Avamar (DECS-IE) certification exam.

These sample questions are simple and basic questions that represent likeness to the real Dell EMC E20-594 exam questions. To assess your readiness and performance with real time scenario based questions, we suggest you prepare with our Premium Dell EMC Avamar Specialist Certification Practice Exam. When you solve real time scenario based questions practically, you come across many difficulties that give you an opportunity to improve.

01. Where is the metadata stored, when a Dell EMC Avamar is integrated with Data Domain?
a) Avamar server
b) Data Domain
c) Avamar Client
d) Cloud
02. An administrator started an on-demand backup of a Dell EMC Avamar client. The backup is running low on performance, the daily scheduled backup for the same client is completing properly. What is a possible cause for the issue?
a) On-demand backups initiate a consistency check before the actual client backup
b) On-demand backups in Avamar are generally slower than the scheduled backup
c) On-demand backups are triggered while garbage collection is running
d) On-demand backups will not check hash cache so more data is sent to the Avamar server
03. What is a characteristic of a Dell EMC Avamar Gen4T Data Store?
a) Internal switches are also connected to the customer network
b) Additional nodes can be added, starting from the top to the bottom
c) Bypass the internal switch by connecting directly to the customer switch
d) All multi-node Avamar servers are installed with two internal switches
04. You want to install a 1 TB Dell EMC Avamar Virtual Edition (AVE) on a VMware ESXi 5.5 server. What is the minimum physical memory that needs to be allocated to the AVE?
a) 4 GB
b) 6 GB
c) 8 GB
d) 16 GB
05. When cabling a Dell EMC Avamar Gen4T utility node, which two network ports are connected to internal switches for high availability?
a) SLIC0NIC0 and SLIC0NIC1
b) SLIC0NIC2 and SLIC0NIC3
c) SLIC1NIC0 and SLIC1NIC1
d) SLIC1NIC2 and SLIC1NIC3
06. What are the four stripe file types that Dell EMC Avamar uses for backup data storage organization?
a) Index, atomic, composite, and hash
b) Atomic, composite, index, and data
c) Atomic, composite, index, and parity
d) Composite, index, hash, and root
07. You have been asked to configure replication on a Dell EMC Avamar 7.3 Gen4S M2400 multi-node server from site A to another Avamar Gen4T M2400 multi-node server running the newest code on Site B.
Which scenario accurately describes this process?
a) Replication is possible, source has newer Avamar version than destination
b) Replication is possible, destination has newer Avamar version than source
c) Replication is not possible, destination has newer Avamar version than source
d) Replication is not possible, source and destination Avamar version must be the same only
08. Dell EMC Avamar support requested a node transplant of a Gen4S M2400 storage node. What is a cause for this request?
a) Memory DIMM failed in the node
b) Power supply failed
c) /data01 file system got corrupted
d) Single disk failed
09. On which TCP port does avagent listen in a Dell EMC Avamar Client?
a) 7778
b) 27000
c) 28001
d) 28002
10. Which commands are used to view the Dell EMC Avamar maintenance activity logs?
a) avtar and dumpmaintlogs
b) avmaint and dumpmaintlogs
c) avmaint and mccli
d) avtar and mccli