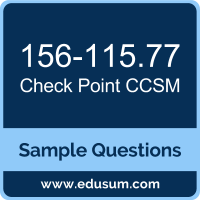 The purpose of this Sample Question Set is to provide you with information about the Check Point Security Master exam. These sample questions will make you very familiar with both the type and the difficulty level of the questions on the 156-115.77 certification test. To get familiar with real exam environment, we suggest you try our Sample Check Point CCSM Certification Practice Exam. This sample practice exam gives you the feeling of reality and is a clue to the questions asked in the actual Check Point Certified Security Master (CCSM) R77.30 certification exam.

These sample questions are simple and basic questions that represent likeness to the real Check Point 156-115.77 exam questions. To assess your readiness and performance with real time scenario based questions, we suggest you prepare with our Premium Check Point CCSM Certification Practice Exam. When you solve real time scenario based questions practically, you come across many difficulties that give you an opportunity to improve.

01. How would one enable ‘INSPECT debugging’ if one suspects IPS false positives?
a) Run command fw ctl set int enable_inspect_debug 1 from the command line.
b) Toggle the checkbox in Global Properties > Firewalls > Inspection section.
c) WebUI
d) Set the following parameter to true using GuiDBedit: enable_inspect_debug_compilation.
02. Which file holds global Kernel values to survive reboot in a Check Point R77 gateway?
a) $FWDIR/conf/fwkern.conf
b) $FWDIR/boot/modules/fwkern.conf
c) $FWDIR/boot/confwkern.conf
d) $FWDIR/boot/fwkern.conf
03. Since R76 GAiA, what is the method for configuring proxy ARP entries for manual NAT rules?
a) WebUI or add proxy ARP ... commands via CLISH
b) SmartView Tracker
c) local.arp file
d) SmartDashboard
04. Jane wants to create a VPN using OSPF. Which VPN configuration would you recommend she use?
a) Site-to-site VPN
b) Domain-based VPN
c) Route-based VPN
d) Remote-access VPN
05. Why would you choose to combine dynamic routing protocols and VPNs?
a) All options listed.
b) In the case of one tunnel failure, other tunnels may be used to route the traffic.
c) Dynamic-routing information can propagate over the VPN, utilizing the VPN as just another point-to-point link in the network.
d) The VPN device can be automatically updated with network changes on any VPN peer Gateway without the need to update the VPN Domain's configuration.
06. What is the command to check how many connections the firewall has detected for the SecureXL device?
a) fw tab –t connections –s
b) fw tab -t cphwd_db –s
c) fw tab –t connection –s | grep template
d) fwaccel conns
07. In IPS what does a high confidence rating mean?
a) This is a rating for how confident Check Point is with catching this attack
b) This is a rating for how likely this attack is to penetrate most systems
c) There is a high likelihood of false positives
d) There is a low likelihood of false positives
08. When optimizing a customer firewall Rule Base, what is the BEST way to start the analysis?
a) With the command fwaccel stat followed by the command fwaccel stats.
b) At the top of the Rule Base.
c) Using the hit count column.
d) Using the Compliance Software Blade.
09. To check what is currently set in the Firewall kernel debug input the command:
a) fw ctl multistate
b) fw ctl debug –x
c) fw ctl pstat
d) fw ctl debug
10. Your cluster member is showing a state of "Ready". Which of the following is NOT a reason one would expect for this behaviour?
a) One cluster member is configured for 32 bit and the other is configured for 64 bit
b) CoreXL is configured differently on the two machines
c) The firewall that is showing "Ready" has been upgraded but the other firewall has not yet been upgraded
d) Firewall policy has not yet been installed to the firewall