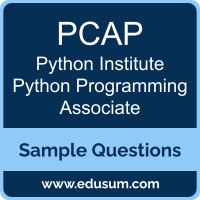 These sample questions are simple and basic questions that represent likeness to the real Python Institute PCAP exam questions. To assess your readiness and performance with real time scenario based questions, we suggest you prepare with our Premium Python Institute Python Programming Associate Certification Practice Exam. When you solve real time scenario based questions practically, you come across many difficulties that give you an opportunity to improve.

01. A compiler is a program designed to
(select two answers)
a) rearrange the source code to make it clearer
b) check the source code in order to see of it’s correct
c) execute the source code
d) translate the source code into machine code
02. You are going to read just one character from a stream called s. Which statement would you use?
a) ch = read(s, 1)
b) ch = s.input(1)
c) ch = input(s, 1)
d) ch = s.read (1)
03. Can a module run like regular code?
a) yes, and it can differentiate its behavior between the regular launch and import
b) it depends on the Python version
c) yes, but it cannot differentiate its behavior between the regular launch and import
d) no. it is not possible; a module can be imported, not run
04. Which of the following sentences are true?
(Select two answers)
a) lists may not be stored inside tuples
b) tuples maybe stored inside lists
c) tuples may not be stored inside tuples
d) lists may be stored inside lists
05. How many elements will the list2 list contain after execution of the following snippet?
List1= [False fori in range(1,10)] list2 = list1[-1:1:-1]
a) zero
b) five
c) seven
d) three
06. Which of the following literals reflect the value given as 34.23?
(select Two answers)
a) .3423e2
b) 3423e-2
c) .3423e-2
d) 3423e2
07. What can you deduce from the following statement?
(Select two answers)
str = open('file.txt', "rt")
a) str is a string read in from the file named file. txt
b) a new line character translation will be performed during the reads
c) if file. txt does not exist, it will be created
d) the opened file cannot be written with the use of the str variable
08. Select the true statements:
(select all that apply)
a) The class keyword marks the beginning of the class definition
b) An object cannot contain any references to other objects
c) A class may define an object
d) A constructor is used to instantiate an object
e) An object variable is a variable that is stored separately in every object
09. What will the value of the i variable be when the following loop finishes its execution?
for i in range(10): pass
a) 10
b) the variable becomes unavailable
c) 11
d) 9
10. The first parameter of each method:
a) holds a reference to the currently processed object
b) is always set to None
c) is set to a unique random value
d) is set by the first argument's value

Note: For any error in Python Institute Certified Associate in Python Programming (PCAP) certification exam sample questions, please update us by writing an email on feedback@edusum.com.