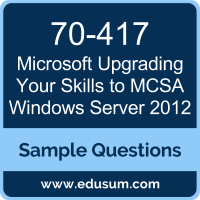 These sample questions are simple and basic questions that represent likeness to the real Microsoft 70-417 exam questions. To assess your readiness and performance with real time scenario based questions, we suggest you prepare with our Premium Microsoft Upgrading Your Skills to MCSA Windows Server 2012 Certification Practice Exam. When you solve real time scenario based questions practically, you come across many difficulties that give you an opportunity to improve.

01. You need to install an additional role on a remote computer named RemServ23 running Windows Server 2012 R2. You need to run the installation from a local computer named ManComp also running Windows Server 2012 R2.
What should you run first?
(Choose two.)
a) Enable-PSRemoting
b) Enter-PSSession
c) Connect-PSSession
d) New-PSSessionOption
e) New-PSSession
02. Your network contains an Active Directory domain named contoso.com. The domain contains a server named Server1 that runs Windows Server 2012 R2 and has the DHCP Server server role installed. An administrator installs the IP Address Management (IPAM) Server feature on a server named Server2.
The administrator configures IPAM by using Group Policy based provisioning and starts server discovery. You plan to create Group Policies for IPAM provisioning. You need to identify which Group Policy object (GPO) name prefix must be used for IPAM Group Policies.
What should you do on Server2?
a) From Server Manager, review the IPAM overview.
b) Run the Get-IpamConfigurationcmdlet.
c) From Task Scheduler, review the IPAM tasks.
d) Run the ipamgc.exe tool.
03. You are an administrator for an Active Directory Domain Services (AD DS) domain with two domain controllers that are running Windows Server 2012 R2.
You are setting up an Active Directory Federation Services (AD FS) farm named adfs that will allow users to connect to claims-aware applications from Windows 8.1 and iOS mobile devices. You want to configure multifactor authentication (MFA) requiring certificate authentication. This should be applied to all clients.
What should you do?
a) Install and configure the Windows Azure Multi-Factor Authentication Server.
b) Run Set-AdfsGlobalAuthenticationPolicy.
c) Run Set-AdfsAdditionalAuthenticationRule.
d) Configure a Relying Party Trust.
04. Your role of Network Administrator at ABC.com includes the management of the Active Directory Domain Services (AD DS) domain named ABC.com. The network includes servers that run Windows Server 2012.
The domain controller that hosts the PDC emulator FSMO role suffers a complete hardware failure. You need to seize the PDC emulator role on another domain controller. You log in to the domain controller and open ntdsutil.exe.
Which context should you use in ntdsutil to seize an FSMO role?
a) Partition Management
b) Local Roles
c) Roles
d) DS Behaviour
05. You want to create a storage pool that can be used with a failover cluster. Which of the following disk types can you use?
a) iSCSI
b) Internal SATA
c) Internal SCSI
d) Serial-Attached SCSI
06. A user has locked his account (again!) and you need to unlock it so they can continue working normally. Which of the following is a possible way to unlock a User Account?
(Choose three)
a) Command Line
b) None of these
c) Windows PowerShell
d) VBScript
07. You are an administrator for an Active Directory Domain Services (AD DS) domain. You configure a physical failover cluster on four member servers that all run Microsoft Windows Server 2012 R2. Each server has the Hyper-V role configured.
The cluster hosts two virtual machines (VMs) named Guest1 and Guest2. They are hosted on different physical nodes. You need to configure the VMs so that they continue to be hosted on different nodes in case of a failover.
What should you do?
a) Configure the AutoFailbackType property with a value of 0.
b) Configure the AntiAffinityClassNames property with the same value for each VM.
c) Configure the AntiAffinityClassNames property with a different value for each VM.
d) Configure the AutoFailbackType property with a value of 1.
08. Which one of the following groups has permission to shut down a domain controller?
a) Backup Operators
b) All of these
c) Print Operators
d) Server Operators
09. Your network contains two servers named Server1 and Server2. Both servers run Windows Server 2012 R2. On Server1, you create a Data Collector Set (DCS) named Data1. You need to export Data1 to Server2.
What should you do first?
a) Right-click Data1 and click Save template...
b) Right-click Data1 and click Export list...
c) Right-click Data1 and click Data Manager...
d) Right-click Data1 and click Properties.
10. You create trusts in Windows Server 2008 with the New Trust Wizard. Which one of the following authentication types is being described below:
An authentication setting that permits unrestricted access by any users in the specified forest to all available shared resources that are located in any of the domains in the local forest.
a) Domain-wide authentication
b) None of these
c) Selective authentication
d) Forest-wide authentication