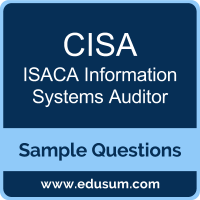 The purpose of this Sample Question Set is to provide you with information about the ISACA Information Systems Auditor (CISA) exam. These sample questions will make you very familiar with both the type and the difficulty level of the questions on the CISA certification test. To get familiar with real exam environment, we suggest you try our Sample ISACA CISA Certification Practice Exam. This sample practice exam gives you the feeling of reality and is a clue to the questions asked in the actual ISACA Certified Information Systems Auditor (CISA) certification exam.

01. An audit charter should:
a) be dynamic and change to coincide with the changing nature of technology and the audit profession.
b) clearly state audit objectives for, and the delegation of, authority to the maintenance and review of internal controls.
c) document the audit procedures designed to achieve the planned audit objectives.
d) outline the overall authority, scope and responsibilities of the audit function.
02. When identifying an earlier project completion time, which is to be obtained by paying a premium for early completion, the activities that should be selected are those:
a) that have zero slack time.
b) whose sum of activity time is the shortest.
c) that give the longest possible completion time.
d) whose sum of slack time is the shortest.
03. An IS auditor observes that an enterprise has outsourced software development to a third party that is a startup company. To ensure that the enterprise’s investment in software is protected, which of the following should be recommended by the IS auditor?
a) Due diligence should be performed on the software vendor.
b) A quarterly audit of the vendor facilities should be performed.
c) There should be a source code escrow agreement in place.
d) A high penalty clause should be included in the contract.
04. Which of the following would BEST ensure continuity of a wide area network (WAN) across the organization?
a) Built-in alternative routing
b) Complete full system backup daily
c) A repair contract with a service provider
d) A duplicate machine alongside each server
05. An IS auditor finds a small number of user access requests that had not been authorized by managers through the normal predefined workflow steps and escalation rules. The IS auditor should:
a) recommend that the owner of the identity management (IDM) system fix the workflow issues.
b) report the problem to the audit committee.
c) conduct a security risk assessment.
d) perform an additional analysis.
06. An IS auditor is reviewing the physical security controls of a data center and notices several areas for concern. Which of the following areas is the MOST important?
a) The emergency power off button cover is missing.
b) Scheduled maintenance of the fire suppression system was not performed.
c) There are no security cameras inside the data center.
d) The emergency exit door is blocked.
07. Which of the following choices BEST helps information owners to properly classify data?
a) Understanding of technical controls that protect data
b) Training on organizational policies and standards
c) Use of an automated data leak prevention (DLP) tool
d) Understanding which people need to access the data
08. A programmer maliciously modified a production program to change data and then restored the original code. Which of the following would MOST effectively detect the malicious activity?
a) Comparing source code
b) Comparing object code
c) Reviewing system log files
d) Reviewing executable and source code integrity
09. An IS auditor is assigned to audit a software development project, which is more than 80 percent complete, but has already overrun time by 10 percent and costs by 25 percent. Which of the following actions should the IS auditor take?
a) Report that the organization does not have effective project management.
b) Recommend the project manager be changed.
c) Review the IT governance structure.
d) Review the conduct of the project and the business case.
10. An enterprise’s risk appetite is BEST established by:
a) the steering committee.
b) security management.
c) the audit committee.
d) the chief legal officer.