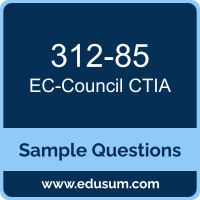 The purpose of this Sample Question Set is to provide you with information about the EC-Council Certified Threat Intelligence Analyst exam. These sample questions will make you very familiar with both the type and the difficulty level of the questions on the 312-85 certification test. To get familiar with real exam environment, we suggest you try our Sample EC-Council CTIA Certification Practice Exam. This sample practice exam gives you the feeling of reality and is a clue to the questions asked in the actual EC-Council Certified Threat Intelligence Analyst (CTIA) certification exam.