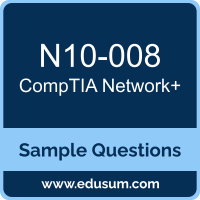 The purpose of this Sample Question Set is to provide you with information about the CompTIA Network+ exam. These sample questions will make you very familiar with both the type and the difficulty level of the questions on the N10-008 certification test. To get familiar with real exam environment, we suggest you try our Sample CompTIA Network+ Certification Practice Exam. This sample practice exam gives you the feeling of reality and is a clue to the questions asked in the actual CompTIA Certified Network+ certification exam.

01. A client on your network has had no problems accessing the wireless network in the past, but recently she moved to a new office. Since the move, she cannot access the network. Which of the following is most likely the cause of the problem?
a) The SSIDs on the client and the AP are different.
b) The SSID has been erased.
c) The client has incorrect broadcast settings.
d) The client system has moved too far from the AP.
02. One of the programmers has asked that DHCP always issue his workstation the same IP address. What feature of DHCP enables you to accomplish this?
a) Stipulation
b) Rider
c) Reservation
d) Provision
03. When a WAN is confined to a certain geographic area, such as a city, it is known as a.
a) LAN
b) MAN
c) VAN
d) VPN
04. Because of a recent security breach, you have been asked to design a security strategy that will allow data to travel encrypted through both the Internet and intranet. Which of the following protocols would you use?
a) IPSec
b) SST
c) CHAP
d) FTP
05. In an Ethernet network, what technology is being implemented when a system wants to send data to another system and first checks to see whether the network medium is free?
a) QoS
b) MDI-X
c) Jumbo frames
d) CSMA/CD
06. What are two features supported in SNMPv3 and not previous versions?
a) Authentication
b) Dynamic mapping
c) Platform independence
d) Encryption
07. Logical unit numbers (LUNs) came from the SCSI world and use “targets” that hold up to how many devices?
a) 4
b) 6
c) 8
d) 128
08. TCP is an example of what kind of transport protocol?
a) Connection oriented
b) Connection reliant
c) Connection dependent
d) Connectionless
09. You suspect that an intruder has gained access to your network. You want to see how many failed logon attempts were made in one day to help determine how the person got in. Which of the following might you do?
a) Review the history logs.
b) Review the security logs.
c) Review the logon logs.
d) Review the performance logs.
10. During a discussion with your ISP’s technical support representative, she mentions that you might have been using the wrong FQDN. Which TCP/IP-based network service is she referring to?
a) DHCP
b) WINS
c) SNMP
d) DNS

Note: For any error in CompTIA Certified Network+ (N10-008) certification exam sample questions, please update us by writing an email on feedback@edusum.com.