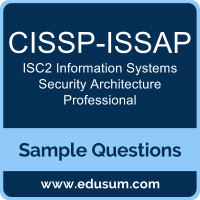 The purpose of this Sample Question Set is to provide you with information about the ISC2 Information Systems Security Architecture Professional exam. These sample questions will make you very familiar with both the type and the difficulty level of the questions on the CISSP-ISSAP certification test. To get familiar with real exam environment, we suggest you try our Sample ISC2 CISSP-ISSAP Certification Practice Exam. This sample practice exam gives you the feeling of reality and is a clue to the questions asked in the actual ISC2 Information Systems Security Architecture Professional (CISSP-ISSAP) certification exam.