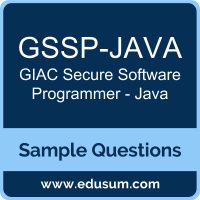 The purpose of this Sample Question Set is to provide you with information about the GIAC Secure Software Programmer - Java (GSSP-JAVA) exam. These sample questions will make you very familiar with both the type and the difficulty level of the questions on the GSSP-JAVA certification test. To get familiar with real exam environment, we suggest you try our Sample GIAC GSSP-JAVA Certification Practice Exam. This sample practice exam gives you the feeling of reality and is a clue to the questions asked in the actual GIAC Secure Software Programmer - Java (GSSP-JAVA) certification exam.

01. Which of the following exceptions will be thrown if the commit() method fails?
a) Destroy Failed Exception
b) Null Pointer Exception
c) Login Exception
d) Security Exception
02. For which of the following purposes is the AccessController class used?
a) To determine most of the parameters of the Java sandbox and whether particular operations should be permitted or rejected.
b) To decide whether an access to a critical system resource is to be allowed or denied, based on the security policy currently in effect.
c) To mark code as being "privileged", thus affecting subsequent access determinations.
d) To obtain a "snapshot" of the current calling context so that access-control decisions from a different context can be made with respect to the saved context.
03. Which of the following methods is used to encrypt or decrypt data in a single step?
a) wrap()
b) update()
c) digest()
d) doFinal()
04. Which of the following statements about data integrity of a container are true?
a) It ensures that an eavesdropper cannot read an HTTP message being sent from a client to a container.
b) Data integrity ensures that information has not been modified by a third party while it is in transit.
c) It ensures that a hacker cannot alter the contents of an HTTP message while it is in transit from a container to a client.
d) Data integrity ensures that information is made available to users who are authorized to access it.
05. In which of the following locations the helper classes of a session bean class reside?
a) EJB JAD file
b) Deployment descriptor
c) META-INF directory
d) EJB JAR file
06. Which of the following statements about the String, StringBuffer, and StringBuilder classes are true?
a) The StringBuffer class offers faster performance than the StringBuilder class.
b) The StringBuffer class is thread-safe while the StringBuilder class is not.
c) A character in a string can be searched using the indexOf() operator.
d) The return type of the trim() method present in the String class is void.
07. The __________ interface accepts results from a SQL SELECT statement.
a) Connection
b) Result Set
c) Prepared Statement
d) Database Meta Data
08. Which of the following CLDC connector modes is used only for data input over a connection?
a) READ_WRITE
b) READ
c) WRITE
d) WRITE_READ
09. According to the EJB programming restrictions, which of the following should be used to access the files or directories?
a) A resource manager API
b) An output device such as screen display
c) An enterprise bean
d) An input device such as a keyboard
10. Which of the following will be the result if an integer overflow occurs in an operation?
a) The StackOverflow error will be raised.
b) The result of the operation will not be changed, but a security warning will be thrown.
c) The data type of the variable will be changed.
d) The high-order bits will be dropped, and only the low-order bits will be stored.