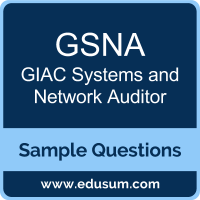 The purpose of this Sample Question Set is to provide you with information about the GIAC Systems and Network Auditor (GSNA) exam. These sample questions will make you very familiar with both the type and the difficulty level of the questions on the GSNA certification test. To get familiar with real exam environment, we suggest you try our Sample GIAC GSNA Certification Practice Exam. This sample practice exam gives you the feeling of reality and is a clue to the questions asked in the actual GIAC Systems and Network Auditor (GSNA) certification exam.

01. Which of the following commands can be used to find out where commands are located?
a) type
b) which
c) env
d) ls
02. In addition to denying and granting access, what other services does a firewall support?
a) Network Access Translation (NAT)
b) Secondary connections
c) Control Internet access based on keyword restriction
d) Data caching
03. Which of the following methods will free up bandwidth in a Wireless LAN (WLAN)?
a) Change hub with switch.
b) Deploying a powerful antenna.
c) Disabling SSID broadcast.
d) Implement WEP.
04. You have just installed a Windows 2003 server. What action should you take regarding the default shares?
a) Disable them only if this is a domain server.
b) Disable them.
c) Make them hidden shares.
d) Leave them, as they are needed for Windows Server operations.
05. Which of the following statements is true about a relational database?
a) It is difficult to extend a relational database.
b) The standard user and application program interface to a relational database is Programming Language (PL).
c) It is a collection of data items organized as a set of formally-described tables.
d) It is a set of tables containing data fitted into runtime defined categories.
06. A Web developer with your company wants to have wireless access for contractors that come in to work on various projects.
The process of getting this approved takes time. So rather than wait, he has put his own wireless router attached to one of the network ports in his department.
What security risk does this present?
a) None, adding a wireless access point is a common task andnot a security risk.
b) It is likely to increase network traffic and slow down network performance.
c) This circumvents network intrusion detection.
d) An unauthorized WAP is one way for hackers to get into a network.
07. What are the different categories of PL/SQL program units?
a) Default
b) Unnamed
c) Primary
d) Named
08. In which of the following is absolute size of frames expressed?
a) Bits
b) Percentage
c) Inches
d) Pixels
09. On which of the following does a CGI program execute?
a) Web server
b) Router
c) Client
d) Client and Web server
10. Which of the following is a technique for creating Internet maps?
a) AS PATH Inference
b) Object Relational Mapping
c) Active Probing
d) Network Quota

Note: For any error in GIAC Systems and Network Auditor (GSNA) certification exam sample questions, please update us by writing an email on feedback@edusum.com.