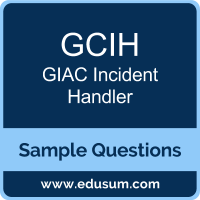 The purpose of this Sample Question Set is to provide you with information about the GIAC Incident Handler (GCIH) exam. These sample questions will make you very familiar with both the type and the difficulty level of the questions on the GCIH certification test. To get familiar with real exam environment, we suggest you try our Sample GIAC GCIH Certification Practice Exam. This sample practice exam gives you the feeling of reality and is a clue to the questions asked in the actual GIAC Certified Incident Handler (GCIH) certification exam.

01. What is the major difference between a worm and a Trojan horse?
a) A worm spreads via e-mail, while a Trojan horse does not.
b) A worm is a form of malicious program, while a Trojan horse is a utility.
c) A worm is self replicating, while a Trojan horse is not.
d) A Trojan horse is a malicious program, while a worm is an anti-virus software.
02. Which of the following types of attacks is the result of vulnerabilities in a program due to poor programming techniques?
a) Evasion attack
b) Denial-of-Service (DoS) attack
c) Ping of death attack
d) Buffer overflow attack
03. You enter the netstat -an command in the command prompt and you receive intimation that port number 7777 is open on your computer.
Which of the following Trojans may be installed on your computer?
a) NetBus
b) QAZ
c) Donald Dick
d) Tini
04. Which of the following types of attacks is only intended to make a computer resource unavailable to its users?
a) Denial of Service attack
b) Replay attack
c) Teardrop attack
d) Land attack
05. In which of the following DoS attacks does an attacker send an ICMP packet larger than 65,536 bytes to the target system?
a) Ping of death
b) Jolt
c) Fraggle
d) Teardrop
06. Which of the following statements about Ping of Death attack is true?
a) In this type of attack, a hacker sends more traffic to a network address than the buffer can handle.
b) This type of attack uses common words in either upper or lower case to find a password.
c) In this type of attack, a hacker maliciously cuts a network cable.
d) In this type of attack, a hacker sends ICMP packets greater than 65,536 bytes to crash a system.
07. What is the purpose of configuring a password protected screen saver on a computer?
a) For preventing unauthorized access to a system.
b) For preventing a system from a Denial of Service (DoS) attack.
c) For preventing a system from a social engineering attack.
d) For preventing a system from a back door attack.
08. In which of the following attacking methods does an attacker distribute incorrect IP address?
a) IP spoofing
b) Mac flooding
c) DNS poisoning
d) Man-in-the-middle
09. A user is sending a large number of protocol packets to a network in order to saturate its resources and to disrupt connections to prevent communications between services. Which type of attack is this?
a) Vulnerability attack
b) Impersonation attack
c) Social Engineering attack
d) Denial-of-Service attack
10. Which of the following statements are true about tcp wrappers?
a) tcp wrapper provides access control, host address spoofing, client username lookups, etc.
b) When a user uses a TCP wrapper, the inetd daemon runs the wrapper program tcpd instead of running the server program directly.
c) tcp wrapper allows host or subnetwork IP addresses, names and/or ident query replies, to be used as tokens to filter for access control purposes.
d) tcp wrapper protects a Linux server from IP address spoofing.

Note: For any error in GIAC Certified Incident Handler (GCIH) certification exam sample questions, please update us by writing an email on feedback@edusum.com.