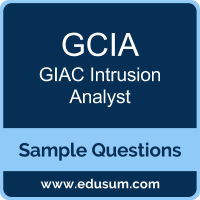 The purpose of this Sample Question Set is to provide you with information about the GIAC Intrusion Analyst (GCIA) exam. These sample questions will make you very familiar with both the type and the difficulty level of the questions on the GCIA certification test. To get familiar with real exam environment, we suggest you try our Sample GIAC GCIA Certification Practice Exam. This sample practice exam gives you the feeling of reality and is a clue to the questions asked in the actual GIAC Certified Intrusion Analyst (GCIA) certification exam.

01. Which of the following techniques allows probing firewall rule-sets and finding entry points into the targeted system or network?
a) Network enumerating
b) Packet collision
c) Distributed Checksum Clearinghouse
d) Packet crafting
02. Which of the following files in LILO booting process of Linux operating system stores the location of Kernel on the hard drive?
a) /boot/boot.b
b) /boot/map
c) /sbin/lilo
d) /etc/lilo.conf
03. Which of the following types of firewall ensures that the packets are part of the established session?
a) Switch-level firewall
b) Application-level firewall
c) Stateful inspection firewall
d) Circuit-level firewall
04. Which of the following work as traffic monitoring tools in the Linux operating system?
a) MRTG
b) John the Ripper
c) IPTraf
d) Ntop
05. At which layers of the OSI and TCP/IP models does IP addressing function?
a) OSI Layer 5 and TCP/IP Transport Layer
b) OSI Layer 2 and TCP/IP Network Layer
c) OSI Layer 4 and TCP/IP Application Layer
d) OSI Layer 3 and TCP/IP Internet Layer
06. Which of the following commands in MQC tool matches IPv4 and IPv6 packets when IP parameter is missing?
a) Match access-group
b) Match fr-dlci
c) Match IP precedence
d) Match cos
07. Which of the following statements are true about snort?
a) It develops a new signature to find vulnerabilities.
b) It detects and alerts a computer user when it finds threats such as buffer overflows, stealth port scans, CGI attacks, SMB probes and NetBIOS queries, NMAP and other port scanners, wellknown backdoors and system vulnerabilities, and DDoS clients.
c) It encrypts the log file using the 256 bit AES encryption scheme algorithm.
d) It is used as a passive trap to record the presence of traffic that should not be found on a network, such as NFS or Napster connections.
08. Which of the following is the correct order of loading system files into the main memory of the system, when the computer is running on Microsoft's Windows XP operating system?
a) NTLDR, BOOT.ini, HAL.dll, NTDETECT.com, NTOSKRNL.exe
b) BOOT.ini, HAL.dll, NTDETECT.com, NTLDR, NTOSKRNL.exe
c) NTLDR, BOOT.ini, HAL.dll, NTDETECT.com, NTOSKRNL.exe
d) NTLDR, BOOT.ini, NTDETECT.com, HAL.dll, NTOSKRNL.exe
09. Which of the following tools can be used to check whether the network interface is in promiscuous mode or not?
a) IPTraf
b) MRTG
c) Chkrootkit
d) Ntop
10. What are the advantages of stateless autoconfigration in IPv6?
a) Ease of use.
b) It provides basic authentication to determine which systems can receive configuration data
c) No server is needed for stateless autoconfigration.
d) No host configuration is necessary.

Note: For any error in GIAC Certified Intrusion Analyst (GCIA) certification exam sample questions, please update us by writing an email on feedback@edusum.com.