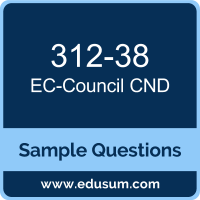 The purpose of this Sample Question Set is to provide you with information about the EC-Council Certified Network Defender exam. These sample questions will make you very familiar with both the type and the difficulty level of the questions on the 312-38 certification test. To get familiar with real exam environment, we suggest you try our Sample EC-Council CND Certification Practice Exam. This sample practice exam gives you the feeling of reality and is a clue to the questions asked in the actual EC-Council Certified Network Defender (CND) certification exam.

01. Which authorization lets users access a requested resource on behalf of others?
a) Explicit Authorization
b) Decentralized Authorization
c) Implicit Authorization
d) Centralized Authorization
02. An IT company has just been hit with a severe external security breach. To enhance the company’s security posture, the network admin has decided to first block all the services and then individually enable only the necessary services. What is such an Internet access policy called?
a) Paranoid Policy
b) Permissive Policy
c) Promiscuous Policy
d) Prudent Policy
03. What is composite signature-based analysis?
a) Multiple packet analysis is required to detect attack signatures
b) Attack signatures are contained in packet headers
c) Attack signatures are contained in packet payloads
d) Single Packet analysis is enough to identify attack signatures
04. John is backing up files that have been changed or created since the last full backup. Which backup technique is John implementing?
a) Incremental
b) Differential
c) Full
d) Normal
05. How does Windows’ in-built security component, AppLocker, whitelist applications?
a) Using Certificate Rule
b) Using Signature Rule
c) Using Path Rule
d) Using Internet Zone Rule
06. Which RAID level does not provide data redundancy?
a) RAID level 0
b) RAID level 1
c) RAID level 50
d) RAID level 10
07. How is the chip-level security of an IoT device achieved?
a) By closing insecure network services
b) By encrypting the JTAG interface
c) By changing the password of the router
d) By turning off the device when not needed or not in use
08. USB ports enabled on a laptop is an example of ____
a) Network Attack Surface
b) System Attack Surface
c) Software attack Surface
d) Physical Attack Surface
09. Which of the following defines the extent to which an interruption affects normal business operations and the amount of revenue lost due to that interruption?
a) Recovery Capacity Objective
b) Recovery Consistency Objective
c) Recovery Time Objective
d) Recovery Point Objective
10. Jeanne is working as a network administrator in an IT company. She wants to control/limit container access to CPU, memory, swap, block IO (rates), network. Which Linux kernel feature allows Jeanne to manage, restrict, and audit groups of the process?
a) Cgroups
b) LSMs
c) Seccomp
d) Userns

Note: For any error in EC-Council Certified Network Defender (CND) (312-38) certification exam sample questions, please update us by writing an email on feedback@edusum.com.