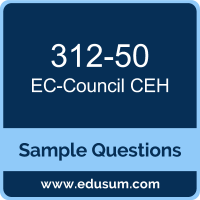 The purpose of this Sample Question Set is to provide you with information about the EC-Council Certified Ethical Hacker exam. These sample questions will make you very familiar with both the type and the difficulty level of the questions on the 312-50 certification test. To get familiar with real exam environment, we suggest you try our Sample EC-Council CEH Certification Practice Exam. This sample practice exam gives you the feeling of reality and is a clue to the questions asked in the actual EC-Council Certified Ethical Hacker (CEH) certification exam.

01. Which cryptographic attack refers to the extraction of cryptographic secrets (e.g. the password to an encrypted file) from a person by coercion or torture?
a) Ciphertext-only Attack
b) Chosen-ciphertext Attack
c) Adaptive Chosen-plaintext Attack
d) Rubber Hose Attack
02. Which one of the following scanning techniques do attackers use to bypass firewall rules, logging mechanism, and also hide themselves as usual network traffic?
a) Stealth scanning technique
b) TCP connect scanning technique
c) Xmas scanning technique
d) Maintaining Access
e) FIN scanning technique
03. A wireless antenna is an electrical device which converts electric currents into radio waves, and vice versa. Which antenna is used in wireless base stations and provides a 360 degree horizontal radiation pattern?
a) Omnidirectional antenna
b) Parabolic grid antenna
c) Yagi antenna
d) Dipole antenna
04. Which following OSI layer is responsible for encoding and decoding data packets into bits?
a) Application layer
b) Session layer
c) Data link layer
d) Network layer
05. CAM table in switch stores information such as MAC addresses available on physical ports with their associated VLAN parameters. What happens when the CAM table is full?
a) Additional ARP request traffic will not be forwarded to any port on the switch
b) The switch will stop functioning and get disconnected from network
c) Additional ARP request traffic will flood every port on the switch
d) It does not affect the switch functioning
06. Which of the following Wi-Fi chalking method refers to drawing symbols in public places to advertise open Wi-Fi networks?
a) WarWalking
b) WarFlying
c) WarChalking
d) WarDriving
07. Consider the attack scenario given below:
Step 1: User browses a web page
Step 2: Web server replies with requested page and sets a cookie on the user’s browser
Step 3: Attacker steals cookie (Sniffing, XSS, phishing attack)
Step 4: Attacker orders for product using modified cookie
Step 5: Product is delivered to attacker’s address
Identify the web application attack.
a) Session fixation attack
b) Unvalidated redirects attack
c) Cookie poisoning attack
d) Denial-of-Service (DoS) attack
08. Which of the following scan only works if an operating system’s TCP/IP implementation is based on RFC 793?
a) NULL scan
b) IDLE scan
c) TCP connect scan
d) Maintaining Access
e) FTP bounce scan
09. Network Time Protocol (NTP) is designed to synchronize clocks of networked computers. Which of the following ports does NTP use as its primary means of communication?
a) UDP port 123
b) UDP port 113
c) UDP port 161
d) UDP port 320
10. Which of the following is a mutation technique used for writing buffer overflow exploits in order to avoid IDS and other filtering mechanisms?
a) Assuming that a string function is exploited, send a long string as the input
b) Randomly replace the NOPs with functionally equivalent segments of the code (e.g.: x++; x-; ? NOP NOP)
c) Pad the beginning of the intended buffer overflow with a long run of NOP instructions (a NOP slide or sled) so the CPU will do nothing until it gets to the “main event”
d) Make a buffer to overflow on the lower part of heap, overwriting other dynamic variables, which can have unexpected and unwanted effects

Note: For any error in EC-Council Certified Ethical Hacker (CEH) (312-50) certification exam sample questions, please update us by writing an email on feedback@edusum.com.