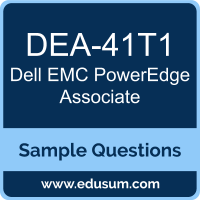 The purpose of this Sample Question Set is to provide you with information about the Dell EMC PowerEdge Associate exam. These sample questions will make you very familiar with both the type and the difficulty level of the questions on the DEA-41T1 certification test. To get familiar with real exam environment, we suggest you try our Sample Dell EMC PowerEdge Associate Certification Practice Exam. This sample practice exam gives you the feeling of reality and is a clue to the questions asked in the actual Dell EMC Certified Associate - PowerEdge certification exam.

01. On a Microsoft Windows Server 2016 with Hyper-V, what is a prerequisite to support the host and run virtual machines at the same time?
a) Hypervisor joined to a cluster
b) 4 GB of memory
c) Host firewall disabled
d) Dual CPU configuration
02. A hospital wants to implement hardware security on one of their web servers. Which implementation meets this requirement?
a) DHCP service
b) Digital signing
c) DNS role
d) TPM
03. An administrator has configured an iSCSI storage array directly connected to a production server. The production application installed on the server relies on a database accessing data in the storage array. Clients are accessing the application through the local network.
Which storage infrastructure is described above?
a) LAN
b) NAS
c) DAS
d) SAN
04. How can an administrator determine if a Dell EMC PowerEdge server component is hot-swappable?
a) Presence of an orange tab on the component
b) Component is on the “HOT SWAP” list available from the LCD front panel
c) Presence of a blue tab on the component
d) Words "HOT SWAP" are printed on the assembly of the component
05. What is an example of a data archive?
a) Data of internal business policies and procedures
b) Data that is corrupted, changed or logged incorrectly
c) Current and critical production data that resides in a server’s primary storage
d) File and mail account data for a user that left an organization one month ago
06. How much raw capacity will be available when deploying a new server that contains six, 3 TB hard drives in a RAID 10 configuration?
a) 9 TB
b) 12 TB
c) 15 TB
d) 18 TB
07. Which RAID level introduces a new state called "partially degraded" when a single drive failure occurs?
a) RAID 0
b) RAID 1
c) RAID 5
d) RAID 6
08. A system administrator wants to remove and replace their operating system installation with a newer version. The administrator is using a Dell EMC Rack server with an iDRAC set up correctly.
Which tools are required to perform this operation?
a) iDRAC, SupportAssist, and Virtual Console
b) iDRAC, Virtual Console, and Virtual Media
c) iSM, Repository Manager, and Virtual Console
d) iDRAC, OMSA, and iSM
09. Which use case is Dell EMC OpenManage Server Administrator recommended for installation?
a) Comprehensive, one-to-one systems management solution for remote or local servers
b) Management console for one-to-many monitoring of Dell EMC infrastructure
c) Management and integration of firmware updates across an entire environment
d) Operation of hardware while iDRAC is non-functional
10. Based on Dell EMC best practices, what is a Network map?
a) Report of all drivers, applications, and firmware associated with each server
b) Guide to where hardware is located, and which connections are part of it
c) List of all hardware in the network, including software and licenses
d) Library of all logs being gathered from each individual server